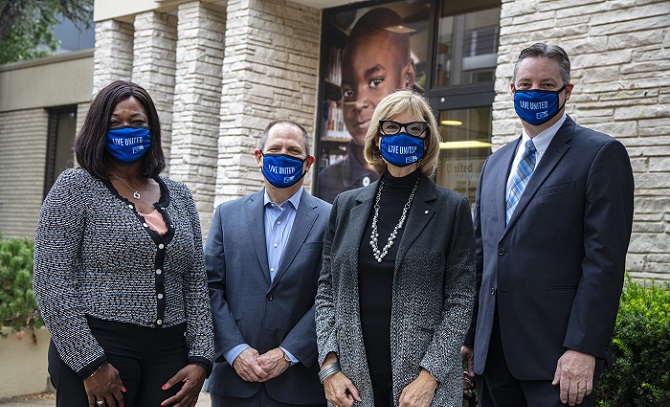 In a press conference on Friday morning, Tulsa Area United Way CEO Alison Anthony announced the campaign chairs for the next three years in the organization’s effort to raise millions of dollars each year to support 59 area non-profit organizations, collaborative initiatives, and innovation grants.

Campaign Chairs give leadership and direction to the current year’s campaign efforts, mobilizing more than 30,000 donors and over 1,000 companies that run workplace campaigns. The chair leads the way in building, organizing and managing a successful volunteer campaign team. The chair sets the spirit, pace and example to generate contributions and awareness so vital in funding health and human service needs in the Tulsa area. This year, under the leadership of Campaign Chair Caron Lawhorn, the Tulsa Area United Way aims to raise $23,720,000 through individual and corporate donations, along with foundation gifts.

As COVID has shaken all parts of society, the Tulsa Area United Way seeks to create stability through leadership in community volunteerism and philanthropy. The campaign chairs will inspire the community to come back strong as key figures in helping to stabilize area social service agencies through community-wide giving. Chairs are selected based on their ability and personal passion to lead the United Way’s annual campaign to improve lives by mobilizing the caring power of thousands in our communities.

“Tulsa Area United Way is continuing the tradition to get the best of the best when it comes to leading fundraising campaigns. This is a big win for us and everyone who currently uses or will need social services in the future,” said Kirk Hays, President and CEO of Arvest Bank Tulsa and 2020 Tulsa Area United Way Board Chair. “We are in good hands as we navigate our way to recovering from these unprecedented challenges and strengthening Tulsa and the surrounding communities by improving lives for years to come.”

The Campaign Chairs will be:

“The collaborative spirit that exists in our community is what enables Tulsa Area United Way and our 59 nonprofit partner agencies to keep the social safety net strong. My heart is so full of joy when I think these leaders, Commissioner Karen Keith, Tim Lyons, Peggy Simmons and Karl Neumaier, will be guiding our campaigns for the next three years,” said Alison Anthony, President and CEO of Tulsa Area United Way. “Despite the uncertain times we are living in, we can be certain that their leadership will position the United Way and the entire Tulsa area community for success.”

Karen Keith (2021 Co-Chair)
Karen Keith, elected as County Commissioner for District 2 in November 2008, has a long history of working to better Tulsa County. Some of her projects include: working to secure federal funding for the West Tulsa/Sand Springs levee system; lead the successful campaign for the new Family Center for Juvenile Justice; leading an effort to build a new OSU Extension building; construction is underway for the Gilcrease Expressway and bridge in a partnership with the Turnpike Authority; ensuring Tulsa County facilities are smoke-free campuses; and working to enhance the Will Rogers Memorial located in Claremore, OK.

Karen worked for 26 years in broadcasting, with 21 years at KJRH as an anchor, reporter and executive producer and host of “Oklahoma Living.” In 2002, Karen became the Mayor’s Director of Community Relations and Vision Implementation. Following her service at City Hall, Karen worked for the Tulsa Metro Chamber of Commerce as the Director of Partnership Development for the Tulsa Convention and Visitors Bureau.

Karen serves on numerous boards and authorities in her role as a County Commissioner. She has received many awards over the years for her professional and volunteer work.

Only the seventh president in TTCU’s 86-year history, Tim was named CEO in 2011. Tim has overseen the credit union’s rapid growth, opening seven new branches and a newly built 90,000 square foot corporate headquarters in south Tulsa under his leadership. Thanks to Tim, TTCU has continued to be a leader in supporting education in Oklahoma. In 2016, TTCU Federal Credit Union spearheaded Support our Schools, which generated over $2.8 million for Oklahoma school districts. Tim also worked to start the School Pride debit card program, where a percentage of each transaction is donated back to the schools, resulting in over $1 million donated to local school districts since the program’s inception.

Tim is a strong believer in the credit union movement and has served on a number of boards and committees for industry organizations. In addition, he is a strong advocate for educational and community causes, serving on the boards of the David Temple Foundation, Tulsa Community College Foundation, Oral Roberts University, Tulsa Area United Way and Tulsa Regional Chamber.

Peggy Simmons (2022 Chair)
Peggy Simmons is President and Chief Operating Officer of Public Service Company of Oklahoma (PSO). She is responsible for all aspects of providing electric service for PSO's more than 550,000 customers. These include customer service, operation of the distribution system, safety, communications, external affairs and regulatory functions.

Simmons joined American Electric Power (AEP) in 1999 and has held a variety of leadership roles with responsibilities in the areas of transmission strategy and policy, regulatory, outreach, siting and rights-of-way for transmission projects, regulatory commodity sourcing, renewables as well as energy scheduling and trading.

Karl Neumaier (2023 Chair)
As Chief Operating Officer for Hilti North America, Karl Neumaier is responsible for operational excellence throughout the region while providing executive leadership for 500-plus team members at the company’s Operations Center campus in Tulsa, Oklahoma.

Karl has spearheaded multiple initiatives to improve efficiency at Hilti, including the introduction of LEAN practices. His drive and ability to lead large and diverse teams has had a lasting impact, supporting and enabling three consecutive years of double-digit sales growth.

Karl currently serves on the Board of Directors for the Tulsa Regional Chamber, the Northeast Oklahoma Chapter of the American Red Cross, Catholic Charities and is a member of the Tulsa Area United Way’s Collaborations Committee, an organization that has raised more than $800 million for the Tulsa community over its 95-year history.